The Rafflesia arnoldii which is known locally as "bunga Rafflesia" is one of the plants protected by law in Indonesia. It is a very rare and a unique plant producing no leaves, stems or roots and it does not even have chlorophyll. Because of this the plant must live as a parasite using the Tetrastigma vine as its host to obtain its nutrients and water. Rafflesia arnodii is not a carnivorous plant, it smells a little of rotting flesh only to attract insects which then pollinate other flowers. The buds of the Rafflesia arnoldii take many months to develop and the flower stays in bloom up to 14 days. Rafflesia arnoldii typically can be seen during wet season between June - December. This sensitive parasitic plant grows only once a year in primary undisturbed rainforest.


Historical Information
The Rafflesia arnoldii was discovered by a British Lieutenant named Sir Thomas Stamford Bingley Raffles who had been appointed the Governor of British Bencoolen (currently known as Bengkulu) and the British botanist Dr. Joseph Arnold when they arrived in Lubuk Tapi – South Bengkulu in May of 1818. The names of the two men - Raffles and Arnold - were used to give the plant its botanical or scientific name. Rafflesia arnoldii is now the official symbol of Bengkulu province.

Directions:
The Rafflesia arnoldii, the world's largest flower can be found in many areas in the jungles of Bengkulu province - Indonesia, normally in Taba Penanjung – Central Bengkulu District (45 km or 28 miles from the city of Bengkulu) and in Tebat Monok Kepahiang District, on the slopes of the Bukit Barisan Mountains, the most accessible being close to the main road halfway between Bengkulu city and the town of Curup. Rafflesia arnoldii may also be found in several other locations in Bengkulu province including:

Let’s help each other!
Let’s make this post available in various languages! Translating this post can help more readers in your language to understand this post. If you would like to translate this post into your language or if you need help to translate some of your posts into Indonesian, and or if you want to use photos from this blog please send me an email to kurt_reyhans@yahoo.com 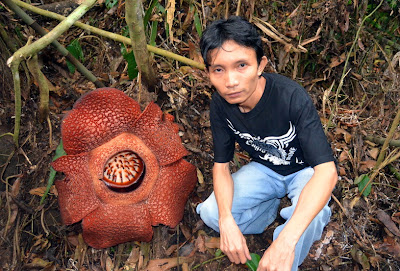 Posted by Adriansyah Putera at 1:09 PM